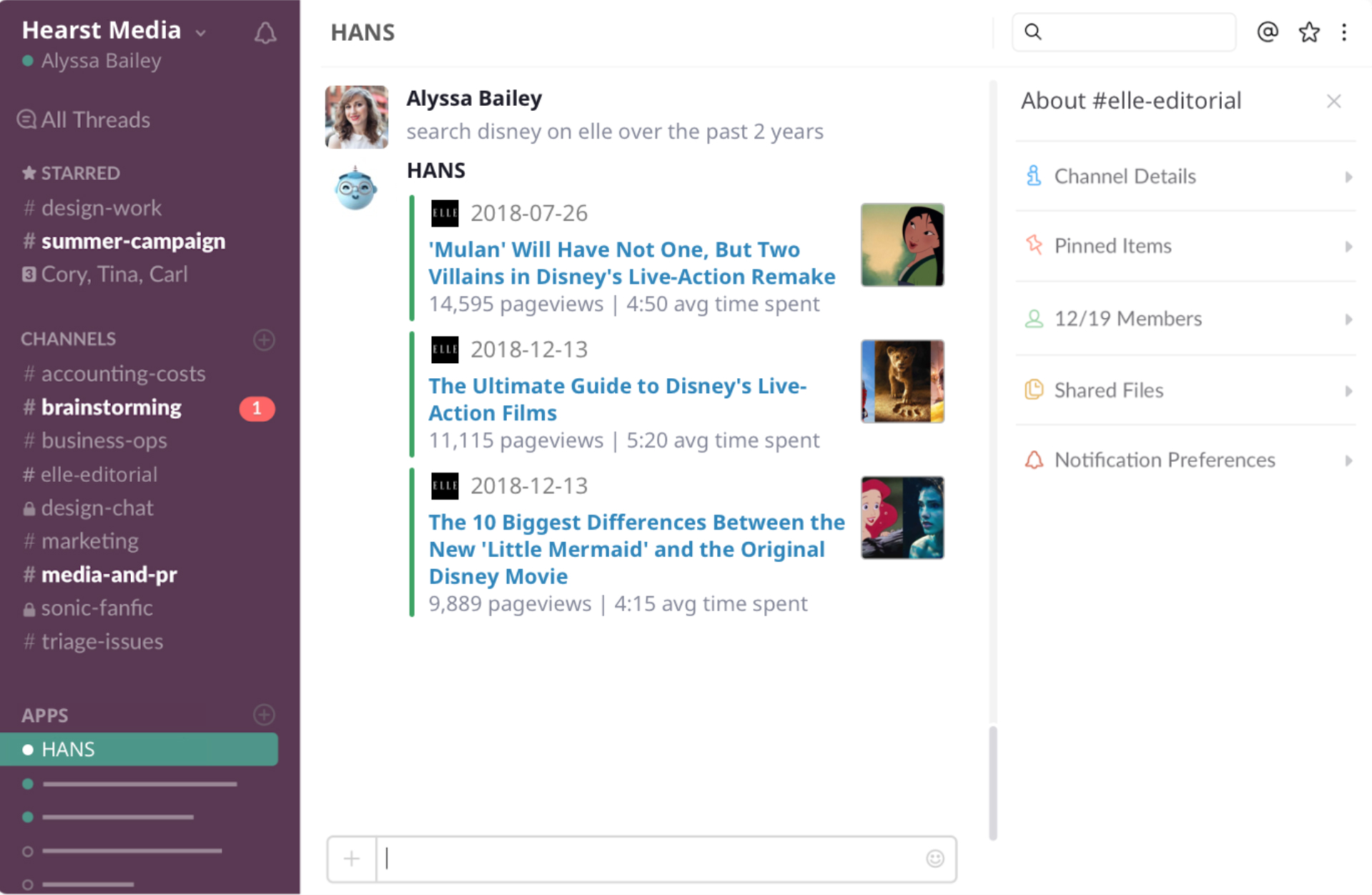 We had a problem at Hearst Magazines. We were sitting on tons of engagement data, but it wasn't making to the right people at the right time. So I helped imagine and develop a Slack bot called HANS that helped democratize our data, increase revenue, and create a more data-driven culture.

The first team we were enlisted to help was editorial. These talented content creators were responsible for creating upwards of 2,500 pieces of content every day across the web and social channels. That sheer volume of content created tons of engagement data, but we quickly learned that a major problem was that nobody had time to look at data because it was too time-consuming.

So we realized quickly that dashboards are where data goes to die, and that any solution we proposed would need to be compatible with how these content creators spent their time – which was largely in Slack.

Getting content engagement data into Slack proved to be less difficult than we imagined. In about a week, I was able to build a prototype Slackbot that connected to the Google Analytics API. This let content creators get data on which content was the highest-performing on certain websites.

To make interacting with the bot easier, I incorporated Google's Dialogflow to help with the natural language processing. This let HANS understand if you were asking about content on Esquire, for example, verses Cosmopolitan and enabled more advanced queries such as "What's the best content on Esquire from all of last year" and "What the most engaging content on Elle this week?".

The addition of Dialogflow also opened doors to exciting new functionality. With "custom intents", we could now begin speaking to other internal departments about what data they'd like to see in HANS. So we begain working more closely with our affiliate commerce department.

From Prototype to Production

By now, little HANS was getting daily active use from two departments; content creation and now affiliate commerce. With more than 20 daily active users - including the president of the company - HANS was becoming a vital part of people's workflow.

Since my prototype code was beginning to buckle under the pressure, and because we wanted to enlist the help of more engineers to help with development, it was time to productize HANS. This meant giving him a dedicated team of engineers and a product manager. I worked closely with HANS' new engineering team to get them onboarded and up to speed as they quickly continued adding new features and intents for other departments.

As a testament to the fabulous new engineering and product team working on HANS, tons of new functionality was added to the bot in the following months. Usage was up to hundreds of daily active users, queries were steady at around 1,000 per day, and Slack even flew me out to San Francisco to speak about HANS at Frontiers 2019.

Since implementing HANS, Hearst has moved the needle on a few fronts.

Thanks to HANS' ability to surface content with the most revenue, it's enabled content creators to syndicate those articles to other brands, resulting in a 2.7x increase in revenue from those stories.

And perhaps most importantly, HANS has helped transform Hearst into a more data-driven culture. Instead of critical data being locked away in silos, it's now freely available in Slack where it can be viewed, shared, and acted upon.

You can read more about HANS on the Slack website, Digiday, and The New York Times.